Most craniofacial anomalies are congenital and result in deformities that can be very disfiguring to the children.
In rural communities these children are often hidden from or shunned by society & in some cases are forced to grow up in seclusion. In the last 30 years or so there have been major advances in the field of craniofacial surgery to help these children. We are currently in the position to offer corrective surgery to these children, affording them the opportunity to integrate into society, attend mainstream schools & live a normal life as far as possible.

At Sunninghill hospital we have a dedicated team that deals with such disorders. This craniofacial service is able to treat indigent patients as well with the help of sponsors such as the Vodacom Foundation as well as others. We have had referrals from all over the country as well as from other countries in Africa.

The main members of the team include specialities such as:

In addition to these specialities, all other fields of medicine that are required are also available if they are required.

The skeleton of the human head is made up from many bones which lie next to each other. The bones surrounding the brain make up the skull or the cranium. The facial bones form the platform for the face. An abnormality of these bones or the skin covering these bones make up what we call craniofacial abnormalities. In these craniofacial problems, the shape and form of parts of the head are abnormal and can often be corrected with craniofacial surgery.
In between the skull bones which cover the brain are the growth plates (sutures). It is these growth plates which allow the skull to increase in size so that the brain is not compressed as it grows. When the head and brain have grown to their full size, the growth plates become hard (fuse) and do not allow any further growth. When this process occurs normally, there is no compression of the brain which can then develop into its full potential. Most of this growth takes place in the first two years of life.
The facial bones grow in a similar fashion but most of the facial growth occurs when the teenage years are reached.
It is for this reason that some craniofacial operations are planned at different ages.
Craniofacial abnormalities can be divided into several groups according to what the causative problem is.

Craniosynostosis or abnormal head shape results from abnormalities in the growth areas of the skull bones. When these growth areas (sutures) close too early they do not allow growth to take place in certain places in the skull. The other growth areas then take over and result in overgrowth of the skull in other areas. When more than one suture is involved, the skull does not grow in many areas and this could result in a small skull and compression of the brain. If the brain is compressed it cannot grow to its full potential. In these cases the head shape is not normal
and could be long, tall or “crooked” depending on which growth area is affected.
There is another type of “crooked” head which is called a deformational abnormality. This is not as a result of an abnormal growth plate in the skull. It is caused by constant pressure on one side of the head which then pushes the skull into a funny shape. This pressure mostly occurs in the uterus before the child is born. In these cases, the
abnormal shape can be treated with correct positioning of the baby. Special X-rays are often required to tell the difference between deformational and craniosynostotic abnormal head shapes.
The abnormal head shape (craniosynostosis) can occur as the only deformity and this is called “non-syndromic craniosynostosis”. If the abnormal head shape occurs together with other deformities then it is called “syndromic craniosynostosis”.
Different abnormal head shapes may result according to which growth plate (suture) is affected. 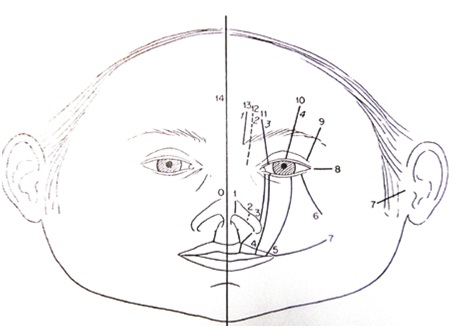 Approximately 1 in 1000 children are born with cleft lip &/or cleft palate. Cleft lip and palate can be corrected surgically and the operations are performed at different ages. The cleft lip is usually corrected at about 3 months of age and the palate is corrected at about 9 months of age. A specialized team is required to deal with these problems. The main members of the team include a plastic surgeon, an orthodontist as well as a speech therapist. I am part of such a team and have performed many cleft lip and palate operations. Our team also has the capacity to treat indigent patients with the help of sponsors such as the Vodacom foundation as well as others.

Craniofacial clefts are much less common but are often more severe than the usual cleft lip & palate. These may involve the nose, the upper jaw (maxilla) and the eye socket.
They can even extend into the cranium. These types of anomalies usually require several operations at different stages of facial growth.
Conditions such as meningoencephalocoeles involve herniation of the brain contents through a defect in the skull. This may occur as a result of a cranial cleft but it may also occur as a separate entity on its own. These conditions also require surgical correction and may also need more than one operation.

This could encompass overgrowth of certain areas of the head and face as well as undergrowth. These may result in disfigurement which can often be corrected by craniofacial surgery.
Fibrous dysplasia is a condition of overgrowth of the bone of the face and skull. It can occur in one area or involve many areas including the bones of the rest of the body. It involves the replacement of normal bone with “scarred” bone and continues to grow. It usually begins at about 10 years of age and continues until adulthood. This disease can limit itself but most cases need surgery as major facial deformities can occur. It can also affect the bone surrounding important nerves such as those to the eye and can result in blindness without an operation.

Rhomberg’s disease is also known as progressive hemifacial atrophy. This condition is not exactly undergrowth but it involves half of the face progressively getting smaller. In other words, the face develops normally and then one side starts to become smaller. This disease involves the skin, underlying fat as well as the bone. It usually starts after 8 years of age. The treatment involves surgery that fills the areas that are getting smaller.

Tumours are growths which occur in certain areas and involve different cells of the body. These tumours may not be life threatening (benign) or they may be very dangerous (malignant) resulting in spread to the rest of the body. Most of these tumours are disfiguring to the face and head and require corrective surgery.
One type of benign tumour that often requires more than one surgery is called neurofibromatosis. It can be passed from parent to child. It is however very deforming in the involved area which is often the face. It comes from the nerve tissue which is abnormal and results in growths which can be massive and deforming. This disease can often involve many areas of the body. It requires surgery to remove most of the tumour and to reconstruct the deformed area.
Unfortunately, it can grow again after surgery as it invades all the surrounding tissue as well.
There are many other types of tumours that can affect the craniofacial area.
In some cases, other types of treatment like chemotherapy and radiotherapy are required as well as surgery.

Craniofacial trauma may result in defects that can be corrected. These defects may involve the soft tissue only but may also involve the underlying bony platform. Bone grafts and soft tissue grafts may be required to reconstruct major defects.